There is something real about the golden age of movies. I'm not really talking about the time period, I’m more or less talking about the storylines. So many movies today are renditions of movies that were once dubbed originals. The well-written, planned, shot, and practiced moments of a forgotten era when time stood still long enough for the audience to breathe. Rather than sit idly on their phones watching the world pass by in a few measly well choreographed staged fruit baskets. We are so concerned with the truth of movies today and how well they portray real or fake life, we often forget the substance behind the story even if it is original. Like many movies of today, I find people more consumed with the actors themselves than the part they portray or the scandal behind the story, rather than the story itself. More often good movies are dubbed sub-par while even B-rated films even if they have an inkling of something special are dubbed flops. Sometimes it's not the actual story, the lighting, the music, or the script that creates the film. Sometimes it's just a spark hidden away in a scene that the audience passes by.

Many films often mimic stories of old by famous authors. Shakespeare, Austen and so on. Youv'e Got Mail is a reminder of the playfulness of unknown/known lover can play in the havoc of one's own romantic notions. The sprite is juxtaposed with the mask of technology. I can say though in many films refer to the golden age. Technology has no part in films, besides that of the cutting room floor. We often hear, to put down our phones, bask in the world around you. The truth is things are easier when you are not glued to technology.

I recently watched Top Hat with Ginger Rogers and Fred Astair. Probably one of the best tap dancing duos of all time. The film was released in 1935 and is dubbed a musical by all accounts. However, I think it has more dancing than singing if we are being honest. The honesty of Top Hat goes without saying, it's as original as Shakespeare but as honest as a child. The flow and rhythm of the story makes, you as the audience feel as if you are watching a story unfold. Without the onslaught of technology, the characters can live in their dream world. Hey before there was Twitter there was something called "word of mouth." Its uncanny how well the film is shot and the offhanded jokes are doled out accordingly. In many Rom-Coms, often the laughter feels forced or the romance feels more of a nuisance than expected. There's never enough of one or the other and sometimes set emotions feel like drama in the end. Films like, The Wedding planner or How to loose a guy in 10 days are in the middle, they portray a rom-com but the jokes are pretty flat. Whereas films such as The 40 year old Virgin or The Proposal are overtly mostly funny and the romance is an afterthought.

There are only a few films in the category of a true rom-com where there is total balance. The story flows and the jokes and banter between the two characters lost in almost love are tied to the notion of a what-if match. What if my moves land the girl, what if she likes me back. Top Hat hits the nail on the head, the roles are perfectly played and the presiding extra characters actually weave a better story than most. They create the balance we seek in rom-coms. Where all the characters work effortlessly together and your not looking for an escape route from the film. 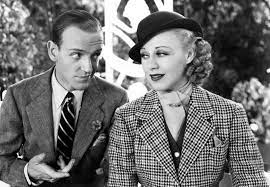 I wouldnt say films are bad now a days, not in the least. I would say in order to appreciate good or even mediocre rom-coms you really need to experience ones that might not be on your radar. We often don't harken back to older films ones that were made 50 to 80 years ago. This is a mistake. In order to really appreciate a good film you can'
t assume its not a third rendition of an original. My hats off too Top Hat, if only we could be so carefree in this day and age.

Popular posts from this blog

December 20, 2021
Ever wonder if an actor can portray more than one character? I think we lump actors into categories. Some actors are always the prefect villain while others can't do anything, but super hero mode. For a long time I thought Danny DeVito could only play one characters or an emulsion of a few, none the less one. If you were to lump his characters together the recipe would be as follows. Danny DeVito iced coffee: Take 1 cup of sarcasm and scrape off the foam, make sure to cool gently before serving. Mix sarcasm and 2/3rds cup begrudgingly dark roasted attitude until fully frothed and skim the froth off this one as well, so that you are left with the smoothest taste of deeze nutz or beans, if your using actual coffee. Then Pour this mixture into a tall glass with ice and serve with your milk of choice. Garnish with a paper umbrella because if your'e serving Danny DeVito iced coffee it might as well be fancy.  Before I go further, I have to be clear, I have not seen every DeVito mov
Post a Comment
Read more

July 10, 2022
I'm thirty-five years old and I love Stranger Things! Since its first season, I have been on every twist and turn the show has offered me and I've gobbled it up like a rampaging demodog. I've rewatched every season at least twice and recently rewatched it with my BF so he could enjoy in the splendor of what is Stranger Things. Although I know there is just one season to go, I'm not mad about it. the foreshadowing that has haunted Stranger Things needs to come to a close as we can't keep believing the actor's arent aging.  I was born in the 80's but I grew up in the 90's. However, I love 80's fashion and many of my favorite movies are from the 80's and 90's. In fact I would say most of them. There is something nostalgic and wonderful about movies without people staring at their phones texting their friends to come over and eat pizza or hangout out in their parent's basement to play spin the bottle. Stranger Things captures the 80's so
Post a Comment
Read more

December 21, 2021
I wonder sometimes why other then for informational purposes do food companies post the serving size of a said product? And a follow up, does anyone actually only eat 28 goldfish? It's hard enough once the bag is open to try and close it and save it for another day. Instead can we just say, half the bag is 400 calories rather than concentrating on the amount you have to eat to stay under that amount. It is funny how movies and food go hand in hand in that way. In many ways they can be restrictive to audiences with ratings for children or adults. They can also restrict our access to go to the bathroom if you can't press the pause button or in the content being not what they portrayed in their catalyst trailer. I can't rate movies in the way they have been rated in the past, Rotten Tomatoes, stars or flixster.  I can only devise a way for myself, my own rules for watching movies just as there are rules and regulations for food. I'm building my own recipe so to speak.  Fi
Post a Comment
Read more

ALC Seltzer
Hi, You've reached Obscure thought. Please leave a message after you have read or skimmed over everything.